I saw a picture once, of a 4WD on one of the long, straight dusty back roads of Australia. The road was red and dusty and stretched out into an impossibly blue sky.

You could imagine the heat radiating off that road, the flies annoying your every breath and the slight breeze that did nothing to take away any of the heat.

There’s something about that picture that radiated more than just heat, it radiated other, intangible things. It radiated feelings like freedom, adventure… and living.

And I’ve been chasing that ‘feeling’ ever since.

When we decided to do this road trip around Australia, we quickly became mired in the ever practical planning of the trip. How much would we need to save, how quickly can we save it, what do we do with all our stuff, what kind of set-up will we need etc, etc, et cetera.

But, always, in the back of my mind, was this picture of a long red road, stretching out before us.

And when we finally got there, months later, I almost forgot to appreciate the moment!

Yes, we had the heat (oh, the heat), the flies, the dust and the wind that was like opening a hot oven, not taking away the heat, but taking away any skerrick of coolness I could have had. And it wasn’t exactly red, more orange really.

But more pressing on my mind was the fact that I’d got us here … by mistake. Yup, didn’t even plan it.

Once when we were wanting to get from Normanton QLD, right up north, and heading West to Katherine NT. We were on the Savanah Way and figured we’d just stay on that road.

I couldn’t understand why the Maps app kept wanting us to go the longer 1,255km route instead of the more direct 523km route. 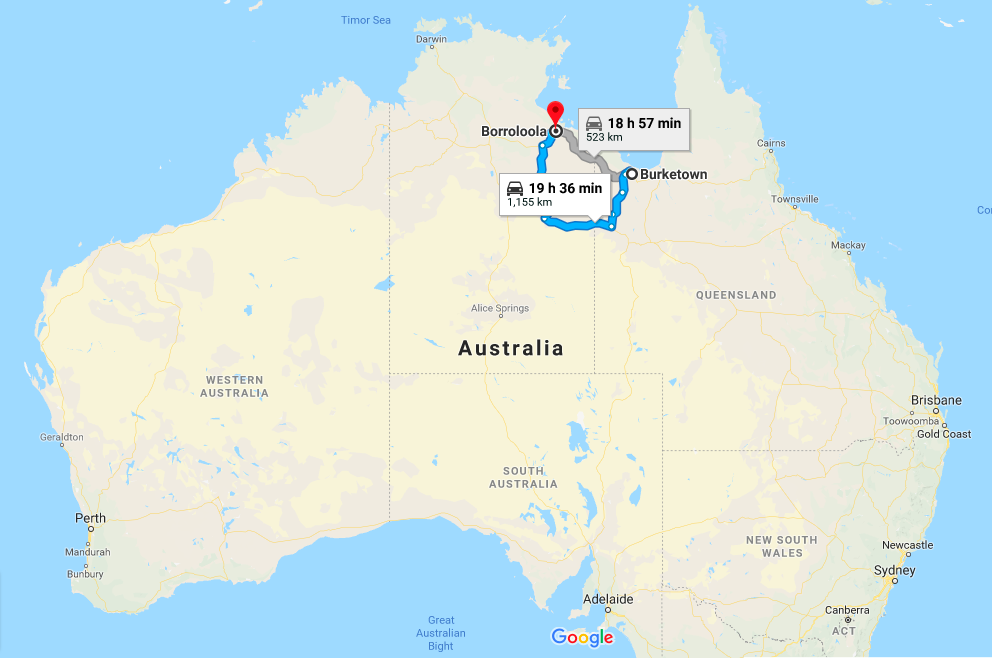 If I’d taken just a little bit of time to notice the difference between the travel times of each route I would have noticed there was almost none.

It was going to take 19 hours to drive the 523kms of the Savanah Way (that should have been my first clue) or a mere 40 minutes longer to drive the extra 730kms on the route the map was recommending. WTF?

That extra time was all about the corrugations.

I wish the maps app would just tell me that it’s a dirt road rather than leaving it to my powers of deduction. :-/

That road was a bit frightening at times, with the huge potholes, sandy spots and ri-ri-ri-ri-ridiculous corrugations, but it was also a lot of fun as we found ourselves laughing at how slowing down made no difference to the intense shudders, exciting as we made our first river crossings and humbling as we picked up three locals hitchhiking to the nearest town – 150kms away!

Do you like it when you end up on those dusty back roads? Or are you intentionally planning (unlike me) to avoid them?

What do I mean by dusty back roads?

The type of road I’m talking about are those that are classed as a road – as in, it’s on the map – but your map may not tell you that it’s not a sealed road surface. I’m not talking about 4WD tracks or anything that requires special driving skills or experience.

Since it’s not sealed, more often than not, the road has formed corrugations or washboarding.

Ben and I theorised back and forth about how the corrugations are formed, we wondered if maybe they were initially formed during rainfall and that car traffic just built up the corrugations, then thought it was all about acceleration as people were coming out of the corners or braking as they came into the corners… but that theory is totally debunked the second you shudder along a dead straight road at the same speed for, like, a hundred kilometres.

Google now reliably informs me that we were wrong on all counts.

When a wheel encounters a random hump in the road, it rises up and falls back down, pushing a bit of material out of its way to create a trough and a second hump. Subsequent wheels continue this process and a pattern of regular humps and troughs emerges.
https://physicsworld.com/a/physicists-hit-the-rippled-road/

That article further explains that though speed, vehicle weight, tyre pressure and original smoothness of the road do have an impact. It’s still inevitable that wheels passing over a granular road WILL cause ripples.

So basically, corrugations are unavoidable.

What precautions do you need to take

Prior to this trip, the longest gravel road I’d driven on was probably less than 100km long. That’s no problem for almost any regular car; but once you add hundreds of kilometres to the journey, a loaded vehicle and often towing a van or trailer, you need to make sure you’re properly prepared for the trip.

Make sure your car is in good condition

Of course you should have your vehicle serviced prior to a big trip but also, pay particular attention to your suspension and tyres.

I’ve seen it recommended that if your vehicle has the stock suspension that originally came on the vehicle or is old, that you should look at upgrading to a suspension system that is more suited to the constant corrugations. And good quality tyres with plenty of tread still on them.

Reduce your tyre pressure by about 20%. Softer tyres will give you better traction to the gravel road but don’t forget to also lower your speed accordingly.

Drive to the conditions

We decided to drive in high range 4WD most of the time as felt that this gave us better traction and control.

While some roads were so good we flew along at 100km/hr it was important to remain vigilant of any upcoming corners, dips in the road or animals on the side of the road as slowing down quickly is a lot trickier on gravel.

And slow down for oncoming traffic. Everyone is out to have a good time so they don’t need a smashed windscreen from the stone you flicked up from going too fast.

Of course you’ll have a spare wheel (and wheel changing tools), but also think of those other ‘spares’ you may need if you become stranded. Extra fuel, oil, tools, coolant, water, a second spare or a puncture repair kit.

Ignore google maps! Well, don’t completely ignore them, but do ignore their travel times on dirt roads. Those times are based on travelling at just 30km/hr, but the condition of many unsealed roads are so good that you can sometimes drive up to 110km/hr.

Being unsealed roads, they are subject to being closed (or restricted to 4WD only) during and after rains. So check with the local authority beforehand, especially in the rainy season.

Make sure you’ve got plenty of drinking water and food for everyone in your vehicle.

And most importantly, consider your communication needs. Will your mobile phone work all the way out in the middle of nowhere (very likely NOT), do you have a UHF (do you know how to use it), a satellite phone or a Personal Locator Beacon (PLB).

The Plan is to Still Take These Roads

I’ve mentioned elsewhere on the blog that we’re intending to buy a caravan. I’d love it if we could afford a nice little off-road caravan so that we could still take these roads. But then we’d also need a bigger vehicle to tow a heavier off-road caravan… and that ain’t happening for a while yet.

So instead, on any roads that we can’t take a caravan on, our intention is to leave the caravan behind and take a rooftop tent to those remote places. It’s not ideal because we’ll have to come back for the caravan. (Our situation is different to many though, we plan on living in our caravan full-time so heading off with just a roof top tent for a couple of weeks will be like a holiday for us. And returning ‘home’ to our caravan will be just like most people returning to their normal homes.)

Even though we ended up on these dusty back roads by mistake, I will now actually seek them out.

Do you like the dusty back roads of Australia?