We’ve been officially on the road for a full five weeks now, so I thought it about time I give you an update on the money side of things.

I’m hoping that this post is particularly helpful to those of you who are wanting to, or planning  to, do a road trip around Australia of your own. We’ve decided to hold nothing back, and tell you exactly how much money we’ve spent and on what, so that you can make some judgement calls for yourselves in your own planning.

In my previous post about money (The Money Post) we detailed our savings plan and how much we had budgeted for setting ourselves up (buying the car and trailer) and then how much we budgeted for six months of living/travel expenses.

Here’s what it looked like, prior to arriving in Australia (the order of the items has changed slightly from the original post, but it’s still the same items and amounts): 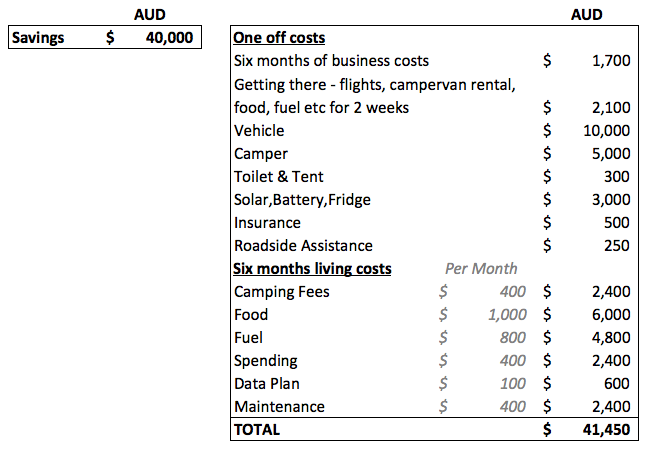 Here’s the overview of what our actual spend has been, compared to what we had budgeted. Below the table I’ve explained our spending in each of the sub-categories.

Flights, car rental, food, fuel etc for 2 weeks – we spent a little more ($300) than budgeted but that’s cos we felt like we were on holiday and had a few little splurges.

Vehicle – we’re really happy with our Hyundai Terracan! We came in under budget by just over $1,200.

Camper – we also came in under budget by over $1,700. But there were things not on our trailer that we’ve had to buy (like gas burner) or stuff that we’ve had to fix. Some of those costs have ended up in the Misc category, but it would only be a couple of hundred dollars. We’re learning to love our camper trailer, but I wrote a post about the issues we have with it here.

Toilet & Tent – we haven’t really needed this yet so we’ve not bothered to get these. When researching for the shower tents online before we left, I saw that they were about $30-$50, but we’ve not seen any for less than $100 here.

Solar, Battery & Fridge – I’m really surprised to find that we haven’t spent over what we had originally budgeted. Cos it sure felt like we have. It feels like we’re constantly pouring money into this category and never really seemed to get it fully fixed. We think we’ve got it sorted now, and Ben has written a post all about the saga here.

Insurance – I had budgeted for six months of car insurance but we’ve bought 12 months. And ummm, I forgot about trailer insurance, so I’ll go and look into that … later. (Okay, I’ll do it before we move the trailer again, and that’s not for another six days, so I’ll have it done by then.)

Roadside Assistance – Gulp. I had kinda, sorta forgotten about this too. :-/ So I’ll get this sorted in the next few days as well as the trailer insurance. Especially as we’re heading into some more remote areas (i.e. the middle of Australia).

Misc – ahh, the good ole miscellaneous category! Lucky we were under budget on other stuff because this (hastily formed) category got a good working out. This included items like: pillows, duvet/blanket, camp chairs, table, storage boxes, dustpan and broom, hose, gas cooker and bottle, jerry can, bucket and umm, ugg boots ($6 from K-Mart cos it was freezing). It all adds up so quickly.

Thank goodness though for parents who provide you with pots and pans and lots of other things that you would have had to go out and buy. And I’m so glad I brought over plenty of linen, cutlery & cooking utensils with us.

Six months of business costs – when I wrote the original budget I thought it would be $1,700 but it will actually be $2,650.

I don’t know how, but it appears that we’ve come in pretty much on budget for the One-off / Set-up costs!

I’m really surprised by this because it feels like we’ve been overspending the whole time we’ve been here. But I’ve been recording all our expenses and I’m pretty sure that the only costs I’ve missed is laundry and any other small things we need to pay for in cash.

It wasn’t until today that I categorised all the costs into ‘One-off / Set-up Costs’ and ‘Living Costs’ (I previously had categories that didn’t translate well to whether they were a one-off or living cost) so it became much clearer where they fit in the budget.

This category was the big unknown for me. I didn’t know for sure if we’d be able to free camp as much as we hoped, and I wasn’t sure that I’d budgeted enough in all the other categories. But we seem to be doing okay… 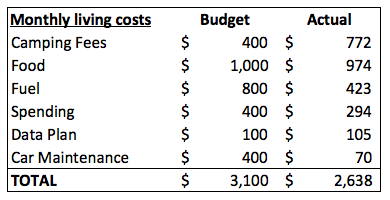 Camping fees – yeah, this is the category that we most need to get under control. We had kinda expected that we would not be doing much free camping in the first month or so, but we blew this budget by A LOT. We also hadn’t factored in the fact that there are not many free (or cheap) camps on the east coast. It’s a tourist highway so it was a bit naive to think we could free or cheap camp.

Food – pretty much bang on budget. I love Aldi and we shopped there whenever we could. Now that we’re in far north Queensland we’ll have to be a bit more careful about shopping in the main centres and not indulging in takeaways too often. This category includes all food, whether grocery shopping, takeaways, restaurants or snacks.

Fuel – this is a (pleasant) surprise that we’re under budget. Our car is doing around 12L per 100kms so we’re stoked about that. It helps that we’re towing a light trailer and we’re not exactly in a hurry.

Spending – this category is a bit of a catchall. It’s for stuff like entry fees to parks, tours and other touristy things. Plus it’s for treats like alcohol, coffees and stuff like clothes or souvenirs. We have purposely not spent money on touristy things… because I had thought our budget was shot! But I kinda love doing some touristy things, so now that we seem to have a better handle on things I want to do more of that stuff.

Data Plan – we’re on a casual plan (where you’re not locked into a contract) with Telstra that costs $70 per month. This gives us 15GB of data and unlimited calls and texts within Australia and to New Zealand. (Yay!) Three weeks in and we realised that 15GB is not enough for us so we bought an extra 10GB for $35.

The next month though, we changed the plan to the $90 plan with 25GB of data. We’re both on strict no-watching-any-videos so that we don’t chew through the data too quickly.

Car Maintenance – while we only spent $70 on a wheel alignment this month, we know we need to keep this money aside for maintenance. This could so easily get out of hand so we’ve got all fingers and toes crossed for safe and trouble free travels.

How it works in the real world

When I set up our budget, I based our living costs on a monthly budget, this was because my income was paid monthly so at that time it made sense. Now that we have no income (!) and we’re keeping things pretty tight, it’s actually easier to work with a weekly budget.

So I took our six months of living costs and divided it by the number of weeks in six months (26 weeks) to find our weekly budget.

Is anyone else scratching their head wondering how two people can possibly live on $623 per week, in a developed country, especially when they’re on ‘holiday’? Yep, it’s pretty unbelievable, even to me.

But it does seem to be working.

On Monday morning I transfer $600 from our savings account into our transaction account and that’s what we’ve got to spend for the week. (Yep, I know that’s not the full amount but I figure we won’t miss that extra $23 each week, and it will keep accumulating a buffer for us. That’s my theory anyway.)

There have been a couple of times where I’ve had to transfer some extra money across because we’ve gone over budget, but only for necessities like accommodation or fuel. We’ve got a reasonably stocked pantry with 2-minute noodles, pasta, cans of veges etc, so it’s not like we’re ever going to go hungry. But if we run out of money on Friday it just means there’s no drinks and chippies, takeaways or excursions over the weekend.

What would I change?

I make no bones about the fact that this is a tight budget. But… it’s what we can afford so that we can do this trip for six months.

Would I increase our weekly budget and decrease the amount of time we have for this trip? No. I LOVE the fact that this trip is six months, if I could do a full year that would be even better. But six months is what we want, and this budget means we should be able to do it.

However… I am feeling a little disappointed that we haven’t done some of the touristy stuff. It’s not that I want to pay $110 each to go on a gondola up into the rainforest in Cairns, or $25 each to see some crystals on display. But I would love to have done a day trip out to snorkel the Great Barrier Reef or a quad biking tour over sand dunes. We’re going to place more of a priority on doing some of these touristy things that cost, as well as continue to do all the free walks, waterfalls and lookouts.

What would you do differently?

I know that everyone is different, we all have different priorities and loves/hates. This is what WE are doing, based on what we like to do and (mostly) on what we can afford. (Cos let’s get real, if we had lots of money there’s quite a lot that we’d be doing differently).

What would you do differently?

If you have any specific questions please don’t hesitate to ask us in the comments (or email us via our Contact page if you’d rather keep it private) and we’ll be happy to help, if we can.

Also, if you’re really into the nitty gritty, sign up for our newsletter below and I’ll send you the excel spreadsheet I use for tracking our spending. You’ll see our spending line by line, if you want.

Just a heads up, I’m offering this because it’s the kind of thing I would have loved when researching for our trip. Even if we weren’t doing a trip like this, I’m just darn curious!

So there’s no judgement here if you’re just curious about what the heck we spend our money on. Okay? 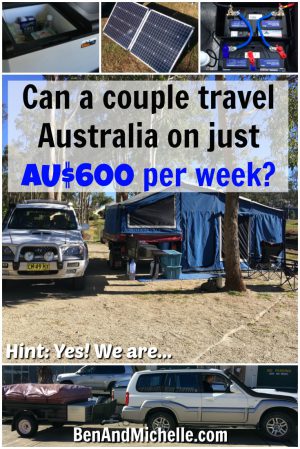 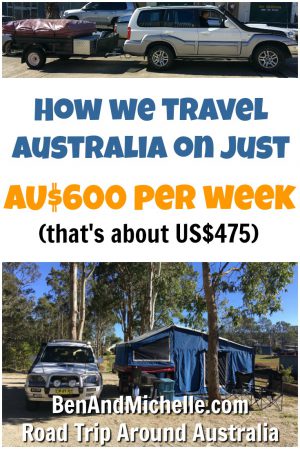