This was originally going to be a video, but for a whole buncha reasons it’s ended up being a blog post instead. One of those reasons is actually what this blog post is all about…. ie. technical difficulties.

But the purpose of this post is, firstly, to explain why we’re so far behind schedule, and so far over budget, and how we eventually fixed the problem (or did we?), and secondly the whole reason we’re documenting our journey is so that other people can learn from our mistakes and experiences, so the more detail we can provide, the better it is for anyone trying to organise their own trip.

The problem was all to do with electricity.

We bought ourselves a portable fridge/freezer so we could go off grid for more than just a few days at a time… then we bought a deep cycle battery to run it… and then we bought a big folding solar panel to keep the battery charged, and keep the fridge running 24/7.

What could possibly go wrong?

Well, once our batteries started dying and the fridge started dying, and the solar panels just didn’t seem to be working anymore, we went back to the shop and asked what was going on…

…and that’s when we found out that the energy coming from the solar panel per hour, is about the same as the fridge is USING per hour…

So according to the salesman…

“There shouldn’t be a problem… right?”

Well, you don’t need to be a salesman to know that the sun only works half the day, and even then, you only get about 6 hours of good sunlight on the panels.

So we realised we needed to buy another 3 solar panels (6hrs x 4 panels = 24hrs of sunlight)… and that’s JUST to run the fridge! Then we still had to power our laptops, charge our phones, and keep the lights on in the evenings!

Well, at $350 each panel, that was just never gunna happen!

Back to the shop

We did go back to shop, but not to buy solar panels. We decided to just buy a 2nd battery and charge one on the solar panel, while the other one was being used, and just keep swapping them over.

Well… if you’re any good at maths, you probably just threw something at the screen… but hey, sometimes we just gotta learn these things the hard way.

Obviously, that didn’t work, so now we were back to square one, but this time we had an extra 25kgs of battery to add to the total weight of the trailer.

So we went seeking more advice from more people, and as a result, we bought 3 cables.

2 small cables were to connect the 2 batteries together in parallel, which has actually been awesome cos we’ve been getting nearly 6 full days out of a single charge.

Then we had the 3rd cable made up specially, so we could plug the batteries into the car (via an Anderson Plug) and charge them up while we drive.

So now, all we had to do was go for a drive whenever the batteries got low… and we’re always sightseeing anyway, so finally… we’d never need to worry about electricity again!

I mean, sure, we’ll have to lift a 50kg battery in and out of the trailer everytime, and be careful not to tilt it “under any circumstances”, plus forever fiddling around with spanners, undoing the connections and doing them all back up everytime, but hey….

Apparently, the lead acid battery gives off deadly fumes while charging, so it’s illegal to charge them in your car while you’re driving!

Ok, count to 10 slowly, and breeeeathe…

We have 3 metres of cable, so we actually CAN leave the 50kg frankenstein battery in the trailer, and just hook it up to the car’s Anderson plug and charge it up that way… but the battery is inside a big metal box.

Now, the big metal box has a lid on the top so we CAN run the cables in the top through the lid… but then we’d have to rig up something to hold the lid slightly open so it doesn’t cut into the cable and short everything out… and it would have to be secured well enough to stop it coming loose from all the bumps in the road.

But that created another problem…

With the big metal battery box lid slighty open, there’s nothing stopping the rain getting in and shorting everything out again… not to mention the amount of dust and debris that would end up inside and all over the terminals and connections, etc.

Ok, so how bout drilling a hole in the metal box to run the cable through so we don’t have to leave the lid open?

“Ah yes, brilliant idea!” I thought to myself.

But Michelle is much more clever than me (and incidentally, much better looking), so luckily, before I went out and spent all that money on a power drill and started hacking away at the metal box, she realised something… “How are we gonna do river crossings if there’s a big hole in the bottom of our battery compartment?”

So after 3 hours of sobbing, in the fetal position on the floor of the shower, wondering if my parents would let me move back in with them, I finally gathered my wits… and together we made an executive decision.

We discovered that there already was a very small hole drilled in the bottom of our battery box anyway, so we decided to deal with waterproofing the box at another time, when we get further up north, where we would be more likely to be crossing rivers… and we just pushed the cable through the existing hole, secured it to the trailers draw bar with zip ties, and finally had some kind of solution to keeping our batteries charged without having to plug into a power point every couple of days.

It’s not over yet though

See, cos now… if we want to charge up the batteries, we have to tow the whole trailer behind us…

This means, we have to pack up our WHOLE camp everytime we wanna go driving to charge the batteries! And when it takes an hour at each end to do so… that just ain’t happenin’!

We only travel every 3 or 4 days, and we only travel 3 or 4 hours at a time, so even though we can now charge our batteries up while driving, it’s still not enough.

We’ve already done a few miles with this set up, and we’ve discovered that the speed at which the car charges the battery is no where near fast enough to completely charge Frankenstein, the 50kg battery, in the short distances that we cover, and on such an infrequent basis.

So then we were gonna have to stay a night or two at caravan parks to charge the battery, so we could spend 4 or 5 days out bush before we have to charge up again.

So we finally realised we just have to bite the bullet and we bought ourselves an AGM battery. AGM batteries are sealed in a way that makes it safer, and therefore legal, to carry inside your car. Michelle goes into more detail on AGM batteries HERE.

We’ve installed it in the boot, along with the Fridge/Freezer, connected it all up and theoretically solved the problem altogether by allowing us to leave the trailer behind while we go sightseeing, charge the battery, and keep the fridge running, all at the same time.

It also means we’ll no longer have to lift the 50kg Frankenstein, or the 60 litre Fridge, in and out of the trailer everytime we set up, and pack up, camp.

But at around $500, buying the AGM battery means we will have to claw back some of our budget by cutting back on a few other luxuries… such as beer and champagne… well… before we get too crazy, we’ll just start with cutting back on champagne first… then see how we go from there.

Since installing the 100Ah AGM battery in the boot of the car, we have been told that if you let them run down below 50% capacity, then you’ll stuff the battery completely. So, while I originally thought we’d get a few days out of it, I now realise that we’ll be lucky to get a day out of it before we have to charge it up again. We were also told that modern alternators, in cars like ours, don’t put out enough excess power to charge an extra battery the way we’re hoping for… so we need to have our solar panel hooked up to it as much as possible.

Personally, I do not understand this… you pay $499 for a battery… but then you find out you can only use half of it at a time? It’s probably not rocket surgery to some, but to me… it’s very confusing!

So our big 50Kg battery bank in the trailer, which lasted nearly 6 days with a power hungry fridge attached, now only has to run a few LED lights, charge a phone, an iPad, and a couple of laptops… so we should get a couple of weeks out of those…

As I hinted at earlier, with the new battery being not allowed to run below 50% capacity, we still haven’t quite yet fully solved the problem and attained full “off-grid” independence, but we’re getting closer… and we’re learning new stuff every day… and the more we learn, the more we realise there is to learn!

Hopefully, now you have a rough idea of one of several reasons why we are behind schedule and over budget, Michelle will be covering a lot more of them in another post, so keep an eye out for that.

If you’re thinking of doing a trip around Australia yourself, I hope this has helped you in some way, or atleast made you aware of yet another factor to consider when planning your trip. 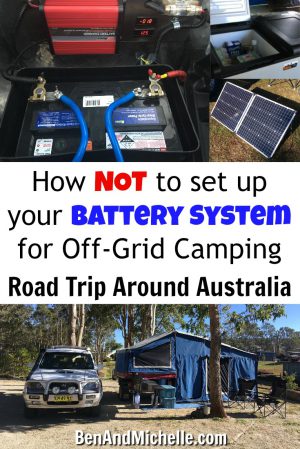 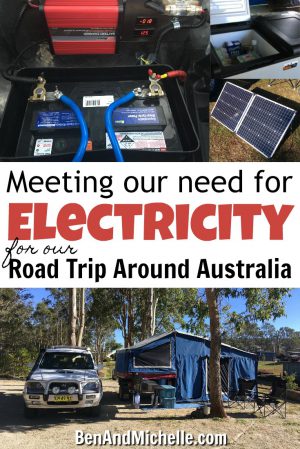 Couldna done it without all your help/advice/numbercrunching, Neil. Thanks heaps! Much appreciated.