‘How to Blow Your Budget on a Road Trip Around Australia’… now there’s a title I didn’t ever want to be writing. I really would rather write a post on ‘How to Spend the Millions Left to You as an Inheritance by a Long Lost Great Uncle’. But alas, my knowledge base is firmly in the ‘how to blow your budget’ camp, so that’s what we’ve got.

Just a heads up: this is looong post, I’ve got a lot to say on the topic of our expenses and the lessons that we’ve learnt in our very short time on the road. So grab yourself a cuppa, or a glass of French bubbles (only the best dahh-ling) and get ready to read about our bumbles on this journey.

Okay, so you may remember in my previous posts I detailed how we were saving for our trip and what our weekly budget is. For a quick recap, the budget is (was) $623 per week to include camping fees, food, fuel and sightseeing/spending money. Other one off expenses like car or trailer maintenance, insurance etc were covered separately.

In my last post updating our budget I was pleasantly surprised to see that we were pretty much on track for our living expenses. We were coming in at about $600 per week, sometimes a bit more and sometimes a bit less.

Yeah, it’s not like that anymore.  We’ve been on the road for a full 12 weeks now and have settled more into the way that we like to travel.

So cutting straight to the chase, here’s what our numbers look like on a week by week basis. (I’ve tried a gazillion ways of displaying this data, so I hope this makes sense to people).

Of course, the devil is in the details huh. So I’ll break it down week by week so you can see exactly what the big overspends were on.

Things are off to a good start. Without even thinking about it we already know that camping fees are going to be higher than we’ve budgeted for but we’re okay with that, I mean, we’ve only just started so we’re giving ourselves some leeway to settle into things. 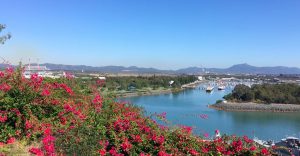 Still doing well because we’re not driving too far (about three hours driving, every three days or so) and not doing any of the touristy stuff (we’ve been here before so we didn’t need or want to do the Gold Coast or the theme parks) so it’s helping to keep costs in line. 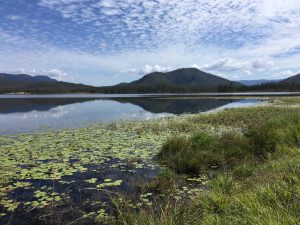 Ditto to the previous weeks. Just finding our way and taking our time. 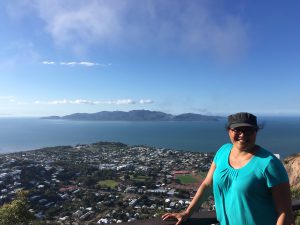 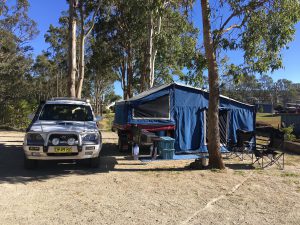 And look, it only took us five weeks to go over our budget, and it’s a doozy. :-O

It’s actually because our Telstra bill was due and that was $140. The Telstra billing is a pain, they bill in arrears and if you add any data packs during the month (which we do) then that gets billed… I dunno when… I just pay the bill when it’s due.

We also overspent on food, it was a couple of takeaways, lunch with a friend and a couple of sneaky snacks and coffees. 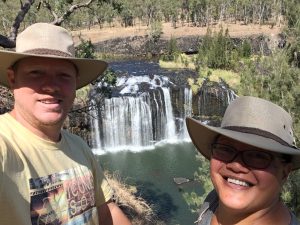 Look what happens when we don’t have to spend $25 per night on a caravan park. Since we stayed put in Ravenshoe, did free sightseeing in the area and only paid $10 per night, it was easy to stay within our budget.

The big kahuna was paying for two tours that we did; Undarra Lava Tubes ($88 each) and Cobbold Gorge ($89 each). Also adding to the costs was the big shop we did at Atherton Woolworths before going remote, which did help to keep food costs in hand in the following couple of weeks.

Travelling large distances coupled with high diesel prices has tripled our diesel costs. From averaging $106 on diesel per week to a massive $309 for Week 8, has blown the budget. Camping is more expensive too.

And the money keeps pouring out of our bank account. Fuel is the killer, as you can see; and continued high prices for caravan parks. We also spent some money on buying two diesel jerry cans and another duvet (for the chilly Alice Springs nights). 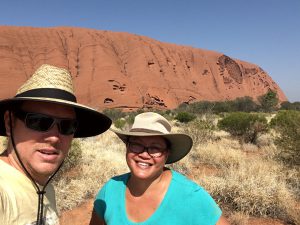 Same again, diesel (our highest spend of $345 in one week) and paying for the sightseeing at Uluru and Coober Pedy. 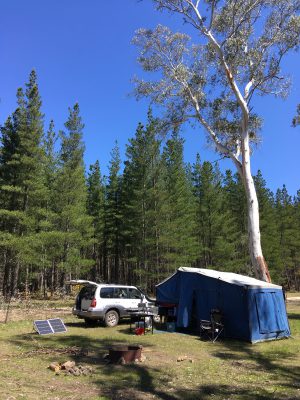 Phew! We’ve almost returned to some kind of normal and can breathe a sigh of relief that we’ve finally had a week where our budget hasn’t been blown completely out of the water.

Well actually… the Telstra data bill is gonna be horrendous in a few weeks. We ran out of data about half way through the month, but we thought that rather than buy extra data packs, we would try really hard to limit our data usage and just pay $10 per extra gig that we used.

Ahem. We used an extra 11Gb. Yeah, we won’t be doing that again. 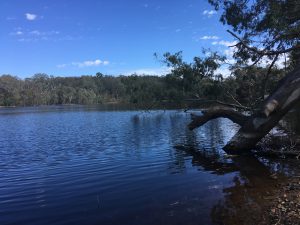 We’re currently staying in the Mt Crawford Forest Reserve in the Adelaide Hills, where an unpowered site is $20 per week. The camping is open until 1st December when the fire danger increases so they close the park until April.

Ummm, we’re thinking of staying here until the park closes at the end of November. Seriously. It’s idyllic here; we’ve made friends with Maggie the magpie (now known as Betty… ‘I can call you Betty, Betty when you call me, you can call me Al…’), we’ve got a fantastic spot nestled among the pine forest on one side and red gums on the others, and have I mentioned it’s only $20 per week?

There’s heaps of walking trails around here, it IS the Barossa Valley so wine tasting MUST be done, and the weather is quite pleasant here at the moment. Okay, it is a little cool, but I can handle that a lot better than I can handle too hot.

So what are the takeaways from all this talk of money and spending lots of it?

Free or cheap camping is a MUST if you want to keep your costs down. We’ve been crap at this and it’s shown in every single week of our expenses. Week 6, where we paid $10 per night in Ravenshoe, and Week 12 where we paid $20 per week in Adelaide, are the ONLY times where we came in below budget for camping.

We’ve found free camping to be a little trickier than we had anticipated, but I’ve written a post about why we didn’t free camp sooner here.

Without a doubt, the speed at which we travelled through the centre of Australia contributed to our high expenses. Not only is fuel expensive but, since we were driving such huge distances each day, we were filling up a lot more. We do have an extra 20L jerry can of diesel but we’re loathe to use it just to save some money, when it’s purpose is for emergencies.

The main reason we were moving so fast is the temperature. We were not really coping with the heat so we just wanted to see the main sites and keep moving. So on that note, the next takeaway is:

We thought we were pretty clever going through the outback in September; being the shoulder season there is a dramatic reduction in traveller numbers at the caravan parks, on the roads and at the sights. At first we were a little bemused at why there is a mass exodus at the end of August, but as the days heated up things became much clearer to us.

Now, don’t get me wrong, it’s not unbearably hot. Probably those that are not overweight and unfit and have a reasonable tolerance to heat will be totally fine and love it. Not so for us. While it wasn’t horrific, the hardest part for us was that we couldn’t get any reprieve from the heat except to go for a drive. So that’s what we did.

Maybe if you’re a bit concerned about the heat, then you should plan your trip for June/July/August. I reckon if you’ve got a caravan with air con you could just stay at powered sites and you’d be totally fine.

We’re both very keen on getting a caravan next. We want to keep doing this kind of lifestyle for a lot longer yet and we feel that a caravan will help us manage our costs. We’d be able to (and feel more comfortable) doing a lot more free camping because we wouldn’t have to set up a tent and we’d have a toilet on board. And we’d make sure to get a caravan with air con so that when we’re in hot regions, we can pay for a powered site so that we can have the air con on, and stay in the region for a bit longer.

So how are we going to get back on budget?

Well, we’re pretty happy with where we are staying at the moment. As I mentioned before, we’re seriously considering staying around here, or at one of the other forest reserves in the area, right up until they close at the end of November. If we can keep our expenses to about $400 for the next couple of weeks that will help immensely. It’s not like we’re sitting here twiddling our thumbs though, there’s lots of walks and wine (!) and catching up on the blog to be done. As well as some brain storming of how to make some money (online) without having to go back to regular jobs.

Oh, by the way, we’ve got no regrets about our budget blowouts. Basically, it costs what it costs and there’s nothing we’ve spent money on that we’re wishing we didn’t. This post is about letting others know what you can do to manage your costs if you’re planning on doing your own road trip around Australia.

What do you guys think? 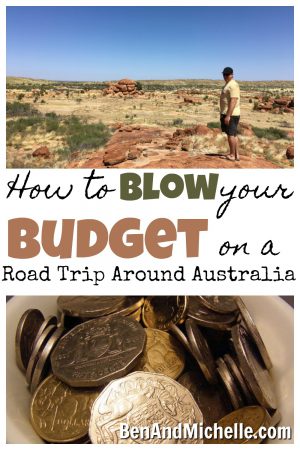 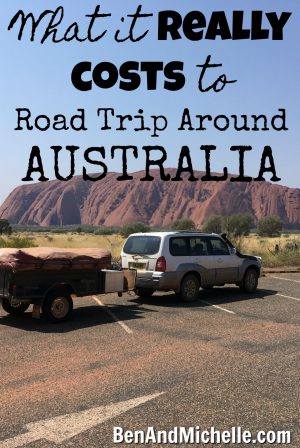