With what we have planned (or more correctly, not planned) for this trip, I think we’re going to have to get used to plans changing. All. The. Time.

So what’s changed about our plans, you ask?

Well, instead of leaving mid-August, we’re now leaving beginning of July. What the?!?! Our three month runway of saving and preparing has just been cut in half to six weeks.

And we’re so excited!

We’ve had a re-structure at my job, and while it hasn’t affected my role specifically, all the change gave us the opportunity to re-think our timing. And so we’ve decided to bring our trip forward a little bit so that my leaving coincides with all the changes.

It’s meant a re-jigging of the savings plan (our budget is in constant re-jigging, so there’s no change there) and some ramping up of decluttering and purging, and getting all the ducks lined up. See…

I know we never really told you what the plan was anyway, except that we’re heading to Australia, going to buy a 4WD and camper trailer and that we were going to travel around for six months. We were never very specific… but that’s because we were never very specific ourselves! But now that we’re just six weeks out, we need to get our A into G and start some actual planning.

So this is the current plan:

•  Fly out of NZ 4th July (Independence Day in America, it seems quite fitting, don’t you think?)
•  Arrive Sydney, where we will have a couple of 4WDs lined up ready to view within a day or two
•  Hopefully have the vehicle and camper trailer purchased within the week (yes, yes, yes we’ll be sensible and not be rushed into any purchases. I’m hoping that it takes us only a week because we will have done all our research and vehicle checks on the ideal candidates prior to arriving in Sydney.)
•  Quick trip to Wollongong to see family
•  And head north as soon as possible because I’m a wus and don’t like the cold weather! (Stopping off in Newcastle, Port Macquarie and Gold Coast for more familial catch-ups)
•  We have a DRAFT (i.e. subject to change based on comments from experienced Oz travellers… no armchair critics on this one please) route planned that will give us six months of taking it pretty easy on one side of the country only
•  Our only commitment (and the reason we’re sticking to one half of the country) is a significant birthday of a loved family member at the beginning of January. 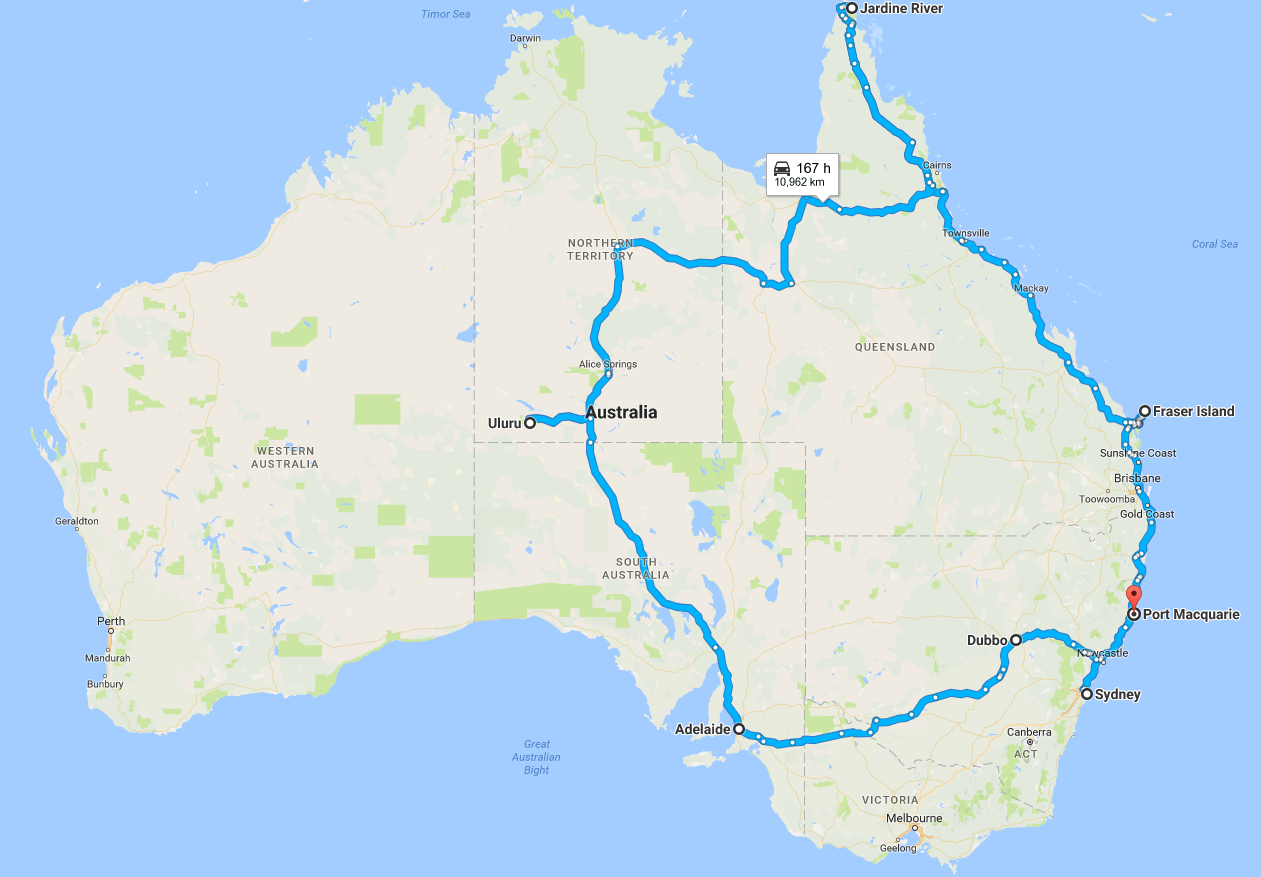 The Plan (as at May 2017) subject to much change, modification and embellishment.

After that…? We have no idea. It will all depend on the state of our finances and whether we’ve been able to make any money online. That’s all part of the excitement (and terror) of the adventure, huh!