Caravan park etiquette is probably a bit of a weird topic to be writing about, but when we were travelling around Australia in our camper trailer we mostly ended up down the back of the park or in the unpowered area. So it’s only since we’ve had our caravan that we’ve joined the ranks of people that line the road ways in row upon row of caravan | awning | 4WD, caravan | awning | 4WD …

The picture below is of the Big4 Ingenia Holidays Cairns Coconut where the sites were not big enough for each person to park their caravan and their car AND open their awning, so the cars have to be parked at the front of the sites. 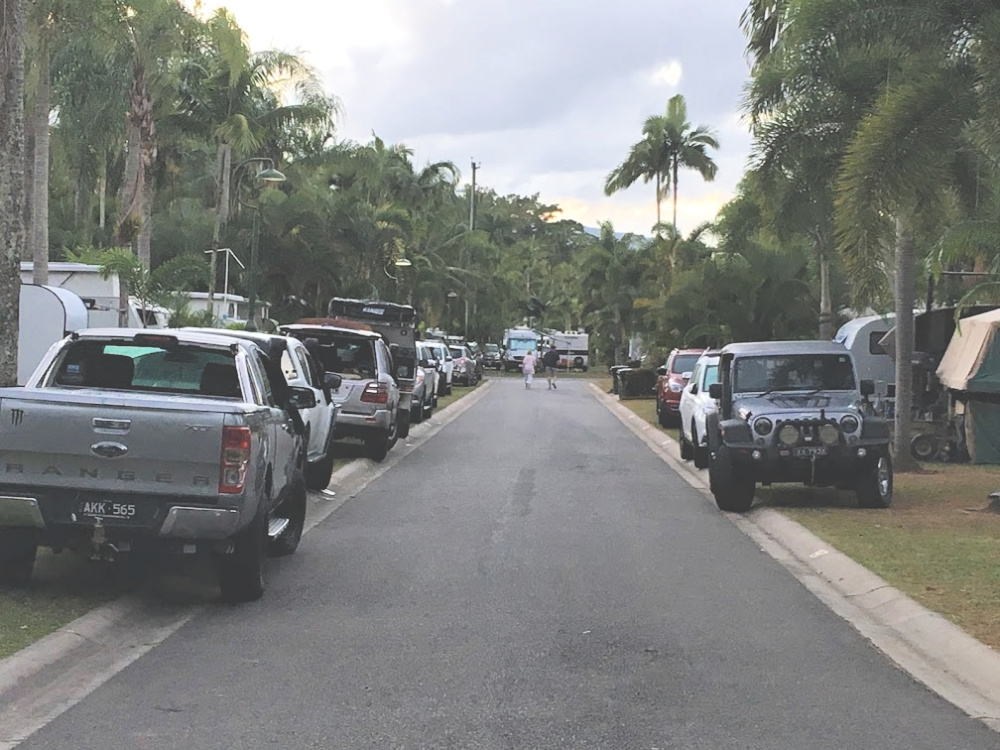 We feel it’s kinda crazy when you leave your house in your suburb only to be parked even closer to your neighbours. But instead of brick walls between you, you’ve got thin caravan walls or just canvas!

When you’re packed in that closely it’s important to be considerate of the other people around you.

Yes yes, I know one of the appeals of this lifestyle is to make new friends and talk to your neighbours etc, but I’m just talking about those common courtesy things that respects every persons’ different levels of comfort around other people, and respect for their personal property.

1. Keep all your belonging wholly within your site

This includes your tow bar, your car, your awning, your guy ropes and pegs, your camp chairs, your washing line, your bikes… you get the point, right? Just stay within your allocated site and everyone is happy.

2. Don’t walk through other people’s sites

They’ve paid for their site so it’s theirs, so just take the extra time to walk around. Walking through other peoples campsites is just rude.

3. Be mindful of noise

Most caravan parks are good about this with noise and music limited to before 10pm, and we really haven’t had a problem with it.

But sometimes people forget that even though they’re talking quietly outside as they have a drink, their bursts of laughter are shocking to the person sleeping only a couple of metres away with only a piece of canvas between them.

Oh… and rumpy bumpy in the middle of the night is great! Except when you’re NOT one of the participants but you’re told repeatedly that you’re a STUD and to DO ME.

Our experience with children…

I wonder if parents freak out a bit that their kids are making too much noise, and it puts unnecessary stress on them?

As a childless couple, I’ve gotta say… that kids making noise have been the least of our worries!

To me, there is nothing sweeter than the sounds of kids giggling and playing. Even their fights and tantrums are not so bad (because hey, it’s not us that has to deal with them!)

Of course, it would be a different story when it’s bed time and you’re trying to get to sleep, or it’s 6 in the morning and you’re not quite ready to be woken up yet.

The thing that is probably more annoying though, is the parents yelling at their kids.

Smile, wave, say hello, go introduce yourself (if you’re not too shy).

We find that most people who leave behind their cozy house to hit the road and see new places, really are the nicest people with (mostly) open minds and are ready and willing for a chat (sometimes a looooong chat… where they do most of the talking!).

5. Try not to block the road way for too long

Of course some people will take longer to back into their site than others, but don’t leave your vehicle hooked up there for an hour while you fix the awning that you’ve just realised is broken.

By the same token, give those who are taking longer than you would, a bit of space and grace.

6. Clean up after yourself

Clean up after yourself In the park loo, shower, laundry and kitchen. And make sure your site is clear of all rubbish before you leave.

7. Give other people space

If the caravan park or show ground doesn’t have allocated sites (or it’s a free camp) and there’s plenty of room, then there’s no reason for you to go and park right next to someone else.

That’s just our tops tips for caravan park etiquette, but let’s hear from others who have been doing this a lot longer than us.

Justin and Bec from Trip In A Van travel with their three kids in a caravan, and here’s their tips for being a good caravan park neighbour.

Kate and Joe from We’re the Russo’s have a great video on RV park etiquette. All these tips would still apply here in Australia.

And this video on campsite etiquette about ‘what not to do at a campsite’ from Camptoo.

Sorry if this ended up sounding like a rant, I honestly didn’t mean it to be; because these bad caravan park neighbours have been very few and far apart for us.

But sometimes people just don’t know what they don’t know.

What about you, are there any other tips for good caravan park etiquette that you think we should add to this list? 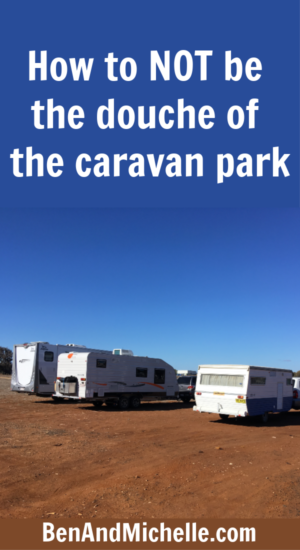