The trek north continues and I think we’re finally getting into the groove of things.

Now that we’re in far north Queensland, we’re where we wanted to be at about this time. As in, we’re as far north as we wanted to be for the coldest months of winter. So there’s no internal/subconscious push to keep going north. We’re here now. We can relax.

This blog post covers 14th to 20th August, from Townsville to Cairns and then to Ravenshoe, QLD. 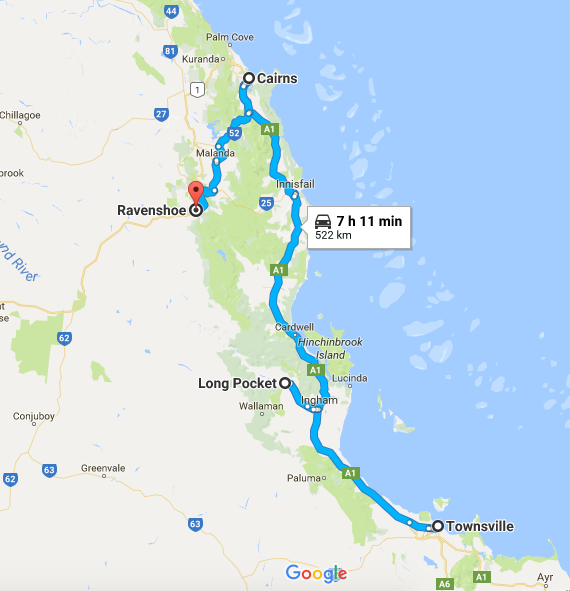 After finally leaving Townsville, we wanted a little bit more remoteness and headed a little bit inland to the Girringun National Park, part of the UNESCO World Heritage listed Wet Tropics Area. This is where Wallaman Falls is so we found a campsite not too far away.

The Ashton Pub has a big, flat grass area out the back which they allow campers to use. It used to be free and all they asked was that you spend a bit of money in the pub and you could use their toilet and shower facilities. But, as is bound to happen, people abused the kindness and now they have to charge $5 per person per night, plus another $4 for a shower. We were happy to pay though, and it meant we didn’t feel obliged to buy dinner in the pub (which would have cost a lot more than the $18 we paid). It was a lovely setting among the cane fields, quiet, and just a few other campers there with us. 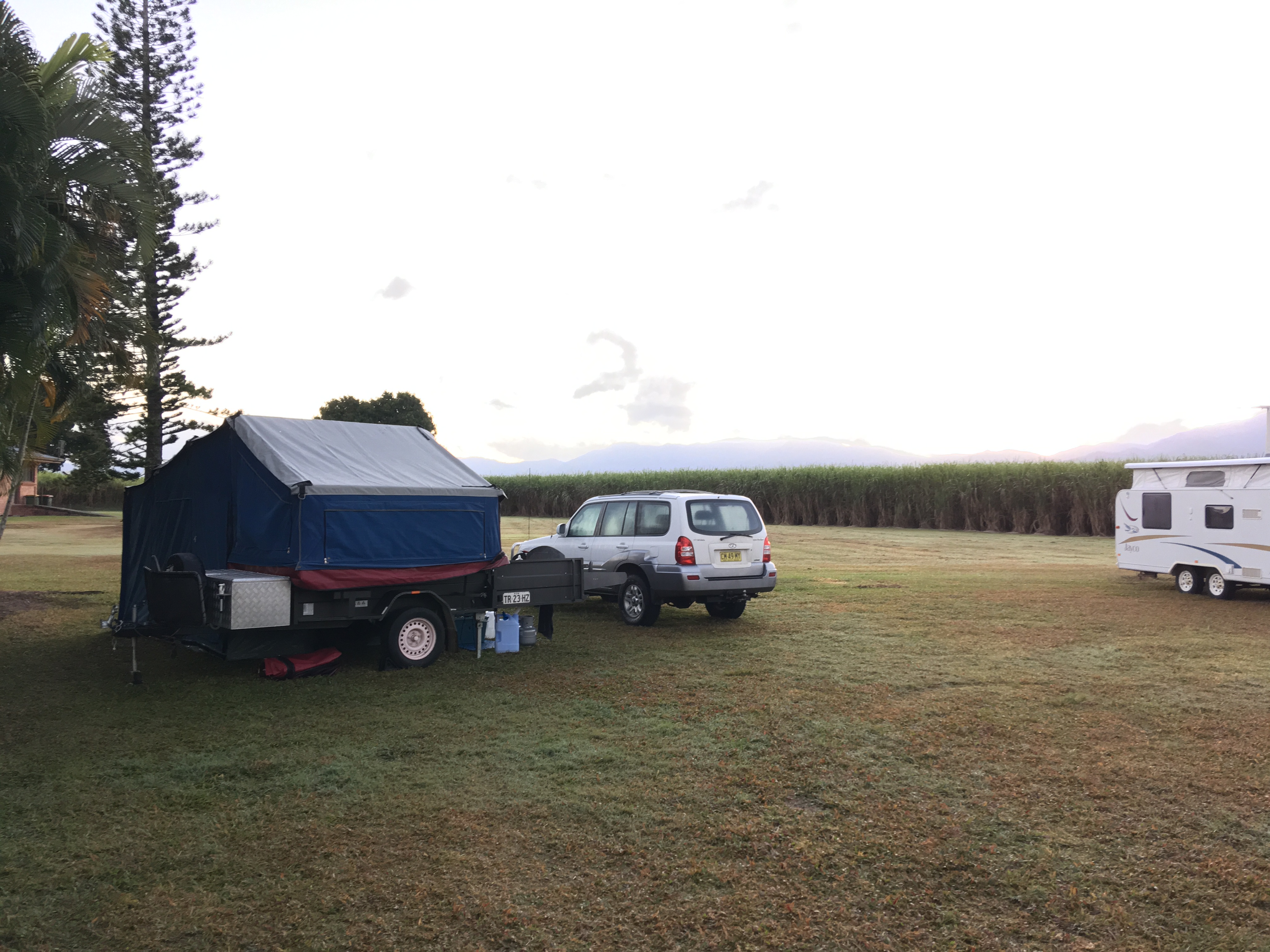 Since we’d got there quite early, we drove out to the Wallaman Falls that afternoon. The drive in itself was entertainment for us; we plodded our way through groups of cattle taking their sweet time on the road and then up a steep and windy road through the tropical forest. We kept our eyes peeled for the elusive (to us) cassowary, but no such luck. We were rewarded with some spectacular sweeping views of the countryside though, and then found the falls.

We were keen to get to Cairns so we just stayed the one night in the pub grounds, packed up and headed north again.

Almost into Cairns we stopped off at the Babinda Rocks for a picnic lunch.

Oh man, I have to up my photo game, big time! These are the only two photos of Babinda Rocks I’ve got. :-O

I’d read been searching WikiCamps for a camp site in Cairns, but almost all the campsites had negative comments about the noise from the neighbours (housing estates outside the campsite) and a general concern about security, so we went for the easy option and booked into the Big4 in Cairns. This place was like a resort! Well, not like a resort, it is a resort; with pools and tennis courts, café and gift shop, and heaps to do for the kidlets like a water/splash park, playgrounds, movie nights and bouncing pillows. I can understand why a park like this is so appealing, especially for families. But it’s not cheap! At $42 per night it was our most expensive nightly rate so far, but we felt safe and we had a primo spot under the trees on the edge of the park away from the jam-packed rows of caravans and 4WDs. We had privacy and quiet so we felt very lucky. The only drawback is that meant a long walk to the loos, which isn’t so much fun in the middle of the night when you’re half asleep. Still, small price to pay.

Big kids on the bouncy pillows, and 4WD alley lined with caravans and big (expensive) 4WDs.

Being the wet tropics, and so close to lots of hills, there are lots of waterfalls in the nearby national parks that you can go and visit. We headed out to Crystal Cascades and Barron Falls. Made for a lovely morning walk each day and some more fabulous photo opportunities.

Short walk through the tropical rainforest to see Crystal Cascades

We have decided that we’re not going to Cape York.

There’s a couple of reasons we’re not doing it: 1) we think it would be silly to go when we have no 4WD equipment or experience. Now, we understand that you don’t have to do the hard-core Old Telegraph Track, but it is still unsealed roads and reasonably remote locations. 2) We realised that we were only really doing it because that’s what you do when you do a big road trip around Australia. Not because either of us had a great desire or bucket list item to get to the most northern tip of Australia.

The nervousness of heading somewhere where we didn’t actually know what we were getting ourselves into, and by ourselves was not worth it. Especially given our nonchalance about going in the first place. And it’s a loooooong way to go when you’re not really overly enthused by it anyway. Did you know Cape York is almost as big as the UK?!

So instead, we decided to head west (ish, more like south west) and up into the Atherton Tablelands.

We’re in a little town (i.e. one street of shops) at a volunteer run caravan park at the Ravenshoe Railway. The steam train isn’t running anymore, so they’ve turned the station area into a caravan park. We’ve lucked out (again) and have a fantastic spot away from the lines of caravans and have a shady spot with just one other camper. 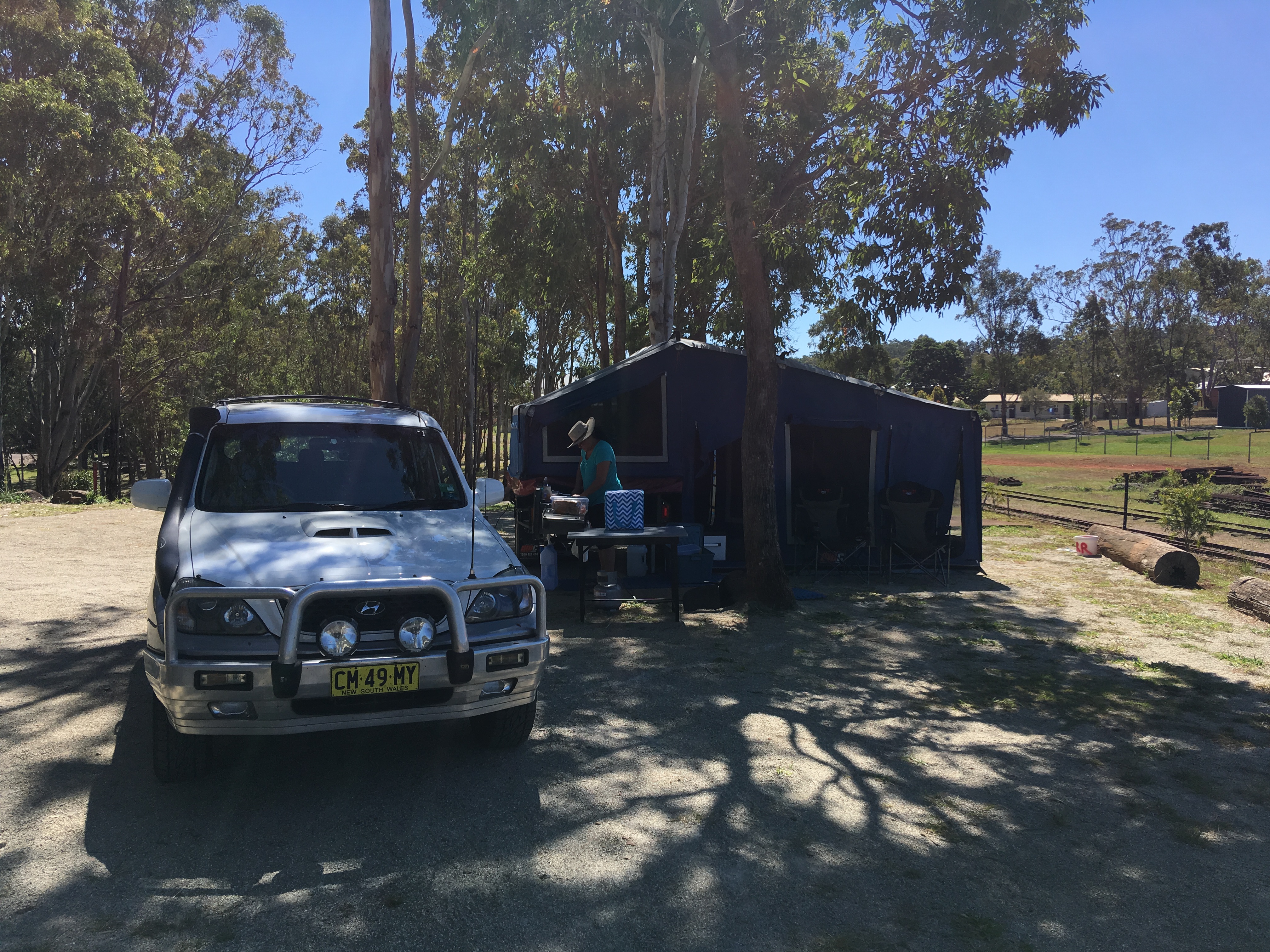 Our shady spot under the trees

I can’t figure out why we keep getting sent to the boondocks at the back of the caravan park… but we love it!

We suspect there’s a few factors at play here:

Whatever the reason, we’re happy when it happens. It’s nice being able to sit outside and not be looking straight at the wall of the caravan parked beside you.